Kearsney and Northwood will be the highlight match as the KZN regular season 2020 gets off to a bit of a watered down start. In the only other official match Clifton hosts Michaelhouse. St Charles’ lack of preparation particularly amongst their junior teams, has resulted in their match against Glenwood being reduced to a controlled practice match. The more unfortunate outcome is the Hilton-Westville practice match, as these are two schools that could be vying for a high place finish in the province. DHS and Maritzburg College are not in action at all. It all underlines the difficulties with scheduling matches in a region made unique by the high percentage of  private schools making up the tier-1 league.

The Northwood 1st XV’s biggest achievement of 2019 was probably beating Maritzburg College (30-26) for the first time ever and achieving this on Goldstones as well. After that they also ended droughts against Westville (19-15), Michaelhouse (20-13) and Kearsney (20-12) on home soil.

Two out of the last three Northwood visits to Kearsney pointed to missed opportunities on Stott Field. Northwood played well enough to win both those matches. Kearsney had a dynamite team that won comfortably in 2016 but in 2014 and 2018 they had to dig very deep indeed and sneaked home 19-11 and 23-22 respectively after seemingly being able to draw on psychological strength of character aided by game-breaking moments from star players to help overcome physical disadvantages.

This year the Knights from Durban North will once again travel to the summit of Botha’s Hill with the same sort of genuine optimism and opportunity as in 2014 and 2018. The formbook is hardest to read at the start of a season but the prediction is for a close match and the outcome may once again boil down to mental stamina and the conversion rate of chances into points.

For Kearsney three of their go-to players of 2019 are all back – captain Mass Fierro (no.8), versatile Derick Marshall (flank) and SA Sevens player Connor de Bruyn (inside centre).

Northwood’s potent and experienced frontrow will be minus one due to Ryan Francis’ ankle injury, leaving  Vernon Matongo (prop) and Danie van Huizen (hooker) as the remaining two KZN Sharks youth week representatives. At pivot the visitors are excited about the potential of flyhalf Immanuel Bhiya to ignite their backline.

Anyway talking about missed opportunities in close Kearsney-Northwood matches on the Stott, here is a short trip down memory lane – all the way back 30 years to 1990.

1990 was the first year of existence of Northwood, a school’s who name came about through the amalgamation of two Durban North boys’ high schools Northlands and Beachwood. As the report below depicts, Northwood left many points on the field that day, eventually losing 10-12. 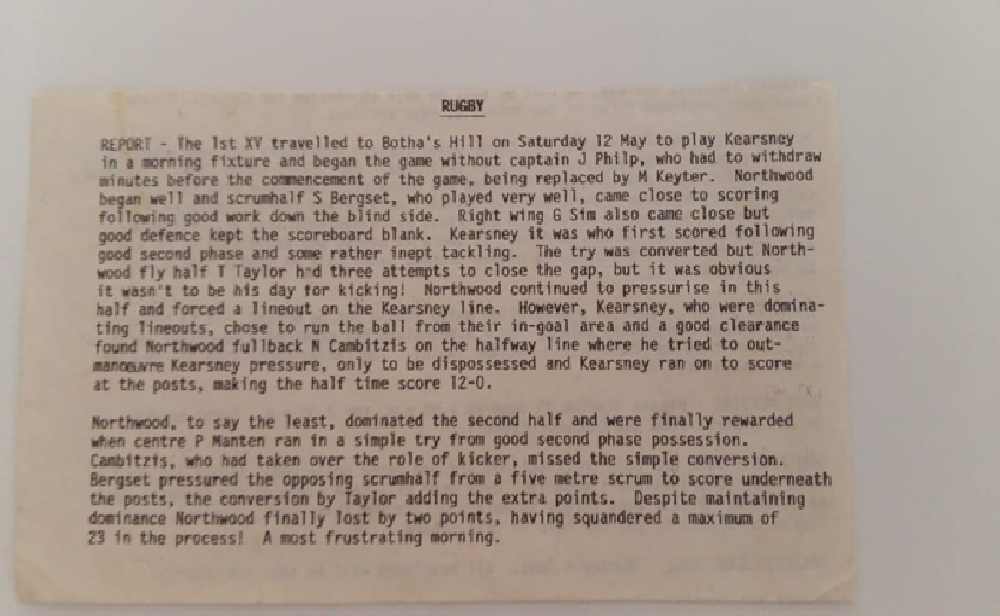