St John’s College have cancelled their sports fixtures against Michaelhouse and returned to Jozi following an incident of racism towards one of the boys during a 1st XV hockey match. Instead of standing up and fighting racism, the private school from Houghton seems to be establishing a trend of submitting to it by making calls that empower it.

In 2017 St John’s had a problem with a geography teacher and even admitted they did not deal with it appropriately until it turned into a huge public incident. Now with this 2022 incident, they will get some praise but they may take a lot of flak for overreacting by letting all the boys who were not part of the act of discrimination, suffer at the expense of the one guilty individual.

It just seems like they played right into the hands of those who support racism. The latter won an easy battle here and reinforced with satisfaction to those who subscribe to it that their choice words are as powerful as ever.

The fight should be to stand up to racism and/or to act in a manner that neutralises its influence, not to run away from it.

With regards to racist slurs, step one is acknowledge the longstanding sensitivity people of different races have towards actions of racial prejudice and don’t ever try to underestimate this. Step two is to do everything in one’s power to disempower those same words that contribute to it. And this applies to all inter-race group relations not just certain ones. 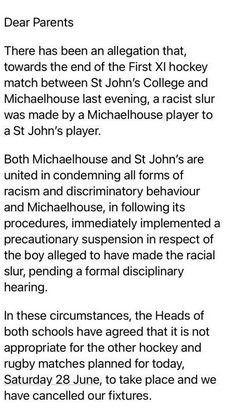