Milnerton appeared to be up in arms over a matric repeater who started for Durbanville in the inter-schools on Saturday. The learner has been a first choice at Durbies since this season kicked off.

He matriculated from a prominent rugby school last year and joined Durbanville in 2022.

Under normal circumstances Milnerton would have had a strong case. However the player in question is still under-18 (u18). In other words, he is not turning 19 this year. He was an u17 when he matriculated in 2021.

So it does seem like a case of trying to enforce the letter of the law as opposed to endorsing the spirit of the law.

The ruling was made in an attempt to stamp out Post-Matrics who had become prolific by the mid-2000. This decision came about at the same time that Craven Week was changed to an u18 tournament. It effectively ended the incentive for u19’s to intentionally enrol at schools for the extra year. In fact, things changed so much that it became a major disadvantage for u19’s to miss out on the first year of junior provincial rugby as a result of being in the school classroom for a great part of the day.

So in a nutshell, the ruling was very much aimed at reducing the participation of u19 students in schoolboy rugby. It has been largely successful. In any given year there are only a handful of u19 players on the circuit.

Durbies are quite transparent about the matter.

In addition to the above, they feel their rugby boy meets the requirement of a bona fide student. He is registered for seven subjects as required.

The Protocols as set out by SARU and WPRU: 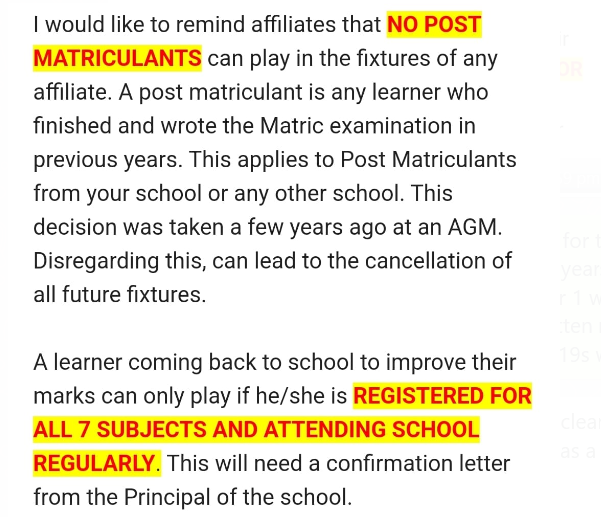 A few years ago Maxwell van Louw, an HS Florida student who represented the Golden Lions at Craven Week as an u17, was prohibited from playing rugby at all in that region the following year, as he was deemed to be a post-matric by virtue of the fact that he had written matric the year before. The ruling seemed unfair as he was still of a Youth Week qualifying age.