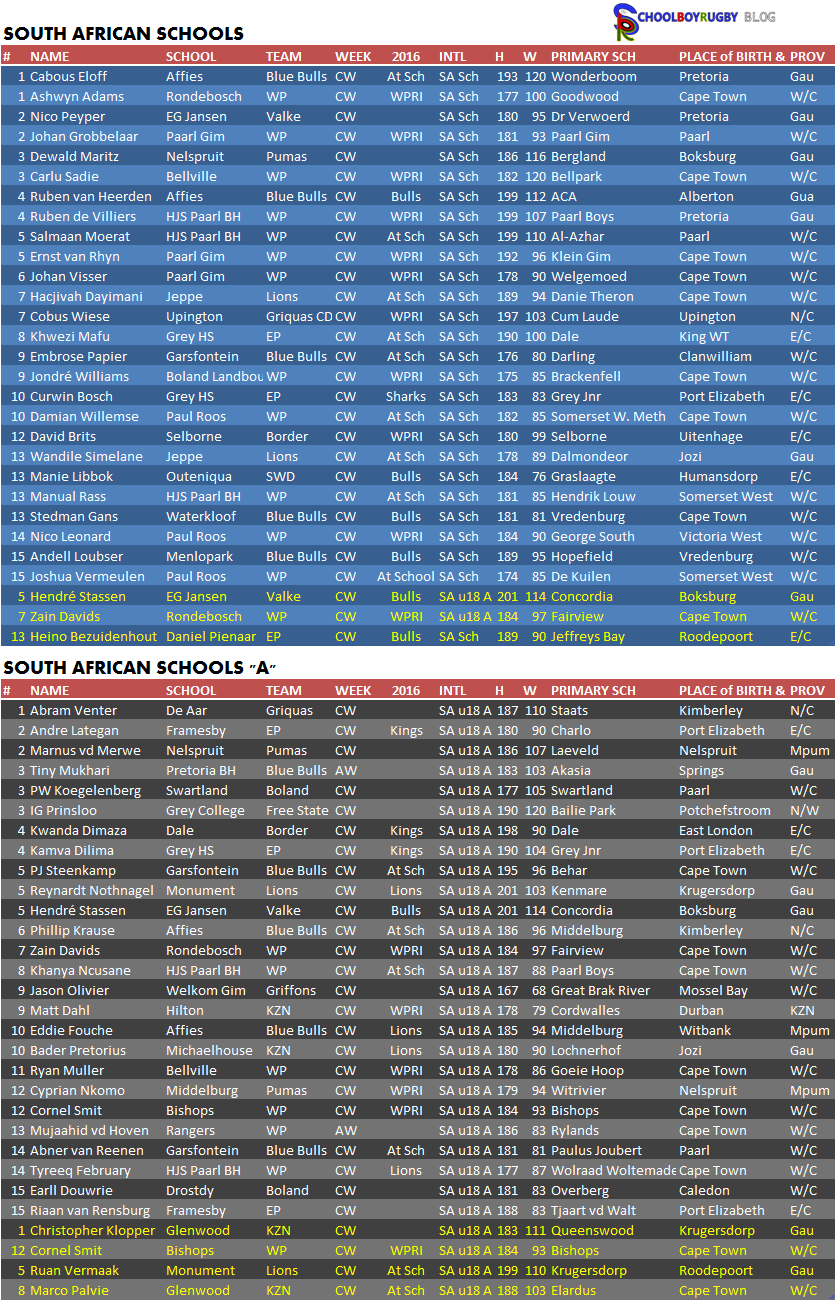 The SA Schools and SA Schools A teams on Friday started the Under-18 International Series on a high note at the City Park Stadium in Crawford, Cape Town, as they registered encouraging victories against Wales and Italy to make their presence felt early on.
The SA Schools team delivered a solid performance on attack and defence against Wales for a 42-11 victory, while the SA Schools A side overcame a closely-fought first half against Italy for 29-14 win.

In the other clash England defeated France 15-7.

The teams will battle it out in the second round in George on Tuesday before returning to the City Park Stadium on Saturday 15 August for the closing round of the Series.
SA Schools 42 (13) Wales 11 (6)

While the SA Schools opted to retain possession on attack and apply pressure, Wales tried to pin them in their own half through tactical kicks. With both defensive systems holding well, however, the first half was dominated by penalties. Bosch added his second penalty in the 26th minute to edge his team into the lead, but this was again cancelled out soon after as McBryde slotted over another.

The hosts, however, finally broke through the Welsh defence in the 31st minute with a try by scrumhalf Embrose Papier, who picked up the ball from a ruck and dived over the chalk following a series of pick-and-goes. The successful conversion pushed the SA Schools 13-6 ahead on the scoreboard.

Bosch had a golden opportunity to inflate the score with another try on the stroke of halftime, but he stepped into touch en route to the tryline following a stunning line break in the middle of the field.

The SA Schools team came out firing in the second half and signalled their intentions in the first minute with a fantastic try by centre Stedman Gans to stretch their lead to 18-6. Gans added another try in the 44th minute after receiving a pass following a poor chip kick by Wales, while hooker Johan Grobbelaar crossed the line for their third try soon after from a charge-down, to stretch the lead to 32-6.

Unfortunately for Wales their hopes of clawing their way back into the match in the closing minutes were dashed as fullback Rhun Williams received a red card for a dangerous tackle. This paved the way for Bosch to add a penalty, while lock Ruben de Villiers scored the SA Schools team’s fifth try to increase their score to 42-6. Wales fought back with a try the last minute to reduce the deficit to 42-11, but this was merely a consolation after struggling to make their presence felt in the match.

The SA Schools A team opened up the scoring in their clash against Italy with a penalty in what was a tightly-fought first quarter. Both teams took a few minutes to find their rhythm on attack early on, but as the game progressed they made better use of their point-scoring chances.

The hosts did well to retain possession in the first half and they supported this with a solid defensive effort, but an intercept try by Italy centre Andrea Bronzili in the 22nd minute allowed them to score the first try of the match. In return, SA Schools A flyhalf Bader Pretorius slotted over two penalty kicks in the second quarter to hand his team a narrow 9-7 lead at the break.

Pretorius increased the hosts lead to 12-7 shortly into the second half with another penalty, but Italy hit back with their second try of the match compliments of a strong shove by the
ir forwards, which pushed them 14-12 ahead.

The SA Schools team and England on Tuesday remained unbeaten in the Under-18 International Series after registering their second round of victories in the competition in an exciting day’s play at Outeniqua Park in George.

The SA Schools team defeated France 12-5 in a hard-fought encounter to close off the day’s play in front of a passionate crowd, while England thumped the SA Schools A team 33-8.

These teams will square up against one another in the final round of the competition at the City Park Stadium in Crawford, Cape Town, on Saturday in what will prove to be the competition decider.
In the other match Wales defeated Italy 32-10.

The SA Schools team signalled their intentions early on against France as they applied pressure on attack from the outset, which earned fullback Curwin Bosch a penalty in the eighth minute to hand the team a 3-0 lead. The following exchanges were tight as both teams used their forwards in an attempt to gain ascendancy and defended well, which resulted in them opting for penalty goals to earn points. The scrums and mauls were particularly physical as both teams put their bodies on the line.

Bosch tripled the hosts’ score to 9-0 in the 31st minute as he added two more penalties. France, meanwhile, tried hard to make their presence felt and managed to work their way five metres out from the SA Schools’ tryline three times in the last 10 minutes of the half, but the solid defence denied them from crossing the tryline.
The second half was equally tense, and with neither team giving an inch on defence, Bosch slotted over his fourth penalty 15 minutes after the break to extend their lead to 12-0.

The hosts came the closest they had been to the tryline in the match soon after by taking advantage of a gap in the defence, but wing Wandisile Simelane was bundled into touch metres from the tryline. France hit back by forcing their way close to the hosts’ tryline twice in the closing minutes, and their strong-minded approach paid off as Thomas Darmon crashed over in the 70th minute to reduce the deficit to 12-5. France struck again in the dying seconds after being awarded a penalty, but the SA Schools team defended like demons to secure the 12-5 victory.
Scorers:
SA Schools – Penalties: Curwin Bosch (4).
France – Try: Thomas Darmon.

England started their clash against the SA Schools A team with a bang as they scored their first of four first-half tries in the first minute compliments of fly half and captain Max Malins.

The visitors dominated territory and possession in the opening 40 minutes by stringing together phases and forcing the SA Schools A team to defend for long periods, and they earned the rewards as they accumulated 26 points in the half. In return the hosts were only able to slot over a penalty compliments of flyhalf Eddie Fouche, as they battled to breach the defence. Despite trailing far behind, however, the hosts defended well on their tryline at times, but the visitors’ tenacity allowed them to break through in the end.
England scored their fifth try six minutes into the second half as Theo Brophy Clews navigated his way through the defence, but this proved to be their only points in the second half as the hosts tightened up their defence and retained possession on attack.

The SA Schools A team’s determined efforts to force their way over the tryline finally paid off in the last 10 minutes as Abner van Reenen forced his way over the chalk to reduce the deficit to 33-8. They continued to show their fighting spirit until the final whistle, but they were unable to add to their score as England’s defence held.
Scorers:
SA Schools A – Try: Abner Van Reenen. Penalty: Eddie Fouche.
England – Tries: Gabriel Ibitoye, Josh Bayliss, Max Malins (2), Theo Brophy Clews. Conversions: Max Malins (3), Theo Brophy Clews.

The SA Schools team on Saturday finished the Under-18 International Series unbeaten as they defeated England 23-16 in a hard-fought and physical encounter at the City Park Stadium in Crawford, Cape Town.

The SA Schools team were smart on attack as they retained possession for long periods, while they put their bodies on the line on defence throughout the match. SA Schools flyhalf Curwin Bosch, meanwhile, kept the scoreboard ticking with his accurate goal kicking.

The victory for the SA Schools team allowed them to finish the Series as the only unbeaten team, while they also avenged their defeat against England in last year’s series, which marked their first defeat in four years in the Under-18 International Series.

In the other match France defeated Italy 25-17.

England opened up the scoring with a penalty in the opening minutes, but they were soon forced to defend as the SA Schools team put together phases and worked their way close to the tryline. The home team’s determined efforts to starve England of possession and score finally paid off in the 22nd minute after hooker Johan Grobbelaar dashed through a gap in the defence before being tackled, which scrumhalf Embrose Papier capitalised on to dive in the first try. Bosch added a penalty soon after to stretch their lead to 10-3.
England hit back with a penalty of their own to trail by only four points, and with neither team able to add to their score the SA Schools entered the break 10-6 ahead.

England fought back with intent after the break as they got their hands on the ball and forced their way through the defence to score their first try compliments of Max Malins to edge their way into an 11-10 lead. But this was short-lived as Papier found space out wide and passed the ball to Hacjivah Dayimani who touched down. Bosch converted the try and added two penalties to push the hosts 23-11 ahead.

Both teams were reduced to 14 players in the minute following a scuffle up-front, and despite neither team having a numbers advantage England managed to force their way through the defence in the last minute to go down 23-16.

Wales applied early pressure on the SA Schools A team as they retained possession and strung together phases, but they were forced to settle for a penalty as they battled to penetrate the defence. The hosts, however, hit back with back-to-back tries within two minutes by flanker Phillip Krause and flyhalf Bader Pretorius after fantastic breaks on attack for a 10-3 lead.

Wales fought back with intent with their strong forwards and managed to force their way over the tryline to reduce the gap on the scoreboard to 10-8 before the break.

The SA Schools A team came out firing in the second half with flanker Kwanda Dimaza dodging his way around a defender and diving over the tryline to extend their lead to 17-8. They added a penalty to stretch their lead to 20-8. Wales, however, forced their way back into the match with a converted try by Josh Macleod to reduce the deficit to 20-15.

They added another try nine minutes later compliments of prop Leon Brown, but an unsuccessful conversion left the scores level at 20-20. Both teams defended like demons in the dying minutes, which forced them to settle for a draw.