The Pretoria Witbulle gave their supporters something to smile about during the first half as they piled on the points via five tries, on their way to beating the hosts Diamantveld  40-3.

Affies tried to speed the game up at every turn. Their ability to execute at high tempo on attack and respond with urgency on ruck defence left the Diamonds with practically no ball or territory in the first half.

For the most part it was delightful interchanges by the backs particularly in midfield which set the tone. The centre pairing of Heinrich Horn and
Tiaan De Wet really stood out in the first half. Affies normally have a good scrumhalf and Armand Shahia is no exception to this rule. Flyhalf and captain Stehan Heymans looks like he is all set to be recognised as one of the best place-kickers in the country in 2022 and he seems like he can step up and general a big match.

Not to be outdone their double-digit numbered teammate, the visitors forwards in addition to their usual power-play and high quality setpiece work, also showed that they had the mobility plus distribution skillsets to keep ball doing the talking and when called on, some tight-forwards even came up with explosive runs into space. Special mention to loosehead prop Luchan Mouton. Hooker is another of the Affies strong positions and having a confident boy like Hanro Venter there who can find his jumpers without issue isn’t something to taken for granted.

Diamantveld stemmed the tide for a bit at the start of the send half, even clawing back three points of their own to break the egg. Their ground gains came mainly as a result of Affies penalised mistakes as it proved incredibly difficult to make inroads with ball-in-hand. Nevertheless after the first half, to hold Affies to just 5-3 in the second half-an-hour was a good effort. 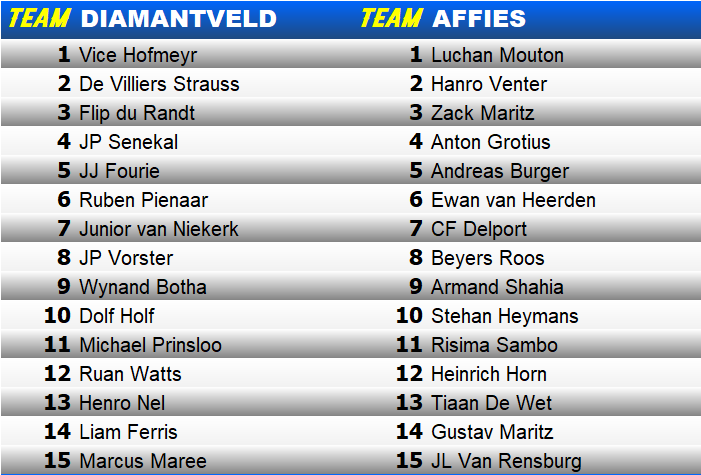