Here is some useless info for you to digest: FOUR different rankings arrived at by using a sample of 65 schools. It is not the BHP official rankings for this site but where possible the formula has been adopted.

BEST LOSER
This season the formula was tweaked to give competitive losers a few more points than they otherwise would have earned. Boland Landbou top the list. 6 of their 7 defeats this season produced a total point difference of -21 or a losing margin of 3.5 points per defeat, suggesting they were in it to win each time, except for a 0-39 blowout against Paarl Gim.

MOST DIFFICULT FIXTURE LIST
UPDATED to include BHP recommendations. The difficulty of a school’s fixture list often comes up in rankings debates on where schools should fit into the bigger picture. So applying the category points to determine the number of top opponents each school played during the season, here are the schools with the most difficult fixture lists. 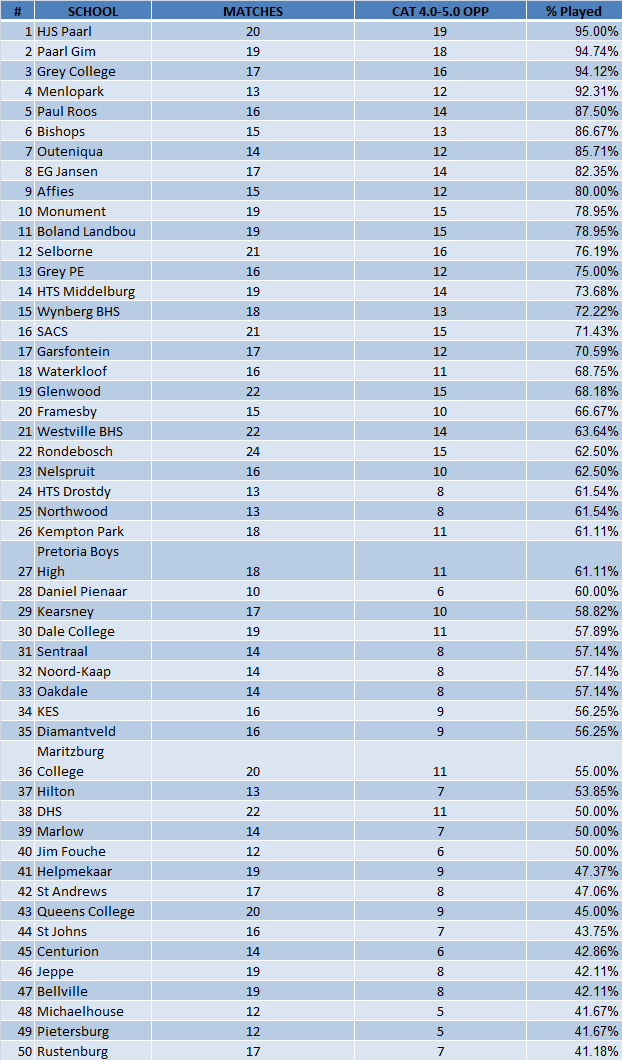 OVERACHIEVER
This is possibly the most meaningless of the four rankings. It is an attempt to look at the actual average points per game achieved by schools versus their category point classification and in so doing identify the schools that have overachieved this season. However with the ability to change category classifications during the season to better reflect the current strength of schools, it would possibly have been better to either match schools’ 2015 achievements against either their average category classification or average ranking position over a period of five seasons or so.

LAST 8 GAMES FORM
This is quite a nice one. The 65 schools in the sample averaged 16 games for the season (to date). So the exercise measures each school’s performance over their last 8 matches of the season in relation to their performance during their first 8 games of the season. Obviously some schools have more than 16 games while others have fewer than 16, so there are omitted games for some and overlaps in the cases of others.