In 2010 South Africa hosted the FIFA World Cup and schools in the republic enjoyed an extra long July holiday that year. As a result, the KwaZulu-Natal schools all decided to end their interschools rugby season before that holiday. On that last weekend of the season Maritzburg College hosted the return match against the Glenwood team coached by SBR legend Sean Erasmus and packed with KZN Craven Week selected players, in a live televised FNB Classic Clash. Glenwood had won a fairly even contest 20-13 on home soil earlier in the year and were favourites to repeat the feat. During a time when TV coverage of school rugby was a low point, College thrilled viewers from around the country as they pitched up and played an amazing match on Goldstones that day, opening holes in what had been a very reliable Glenwood defence before that game, and scoring numerous tries on their way to a famous 35-16 win. Being a high school with quite a passionate and tight-knit old boy community, College have never been short of dedicated supporters at their matches. One seriously doubts that any of those rugby lovers with that long-term relationship could ever have fathomed that 2010 would be the last time in this decade that their 1st XV would be on the winning side against Glenwood. That is how history has played out though. In 14 subsequent matches during the “10s”, Glenwood has won 12 while the other two results were draws. 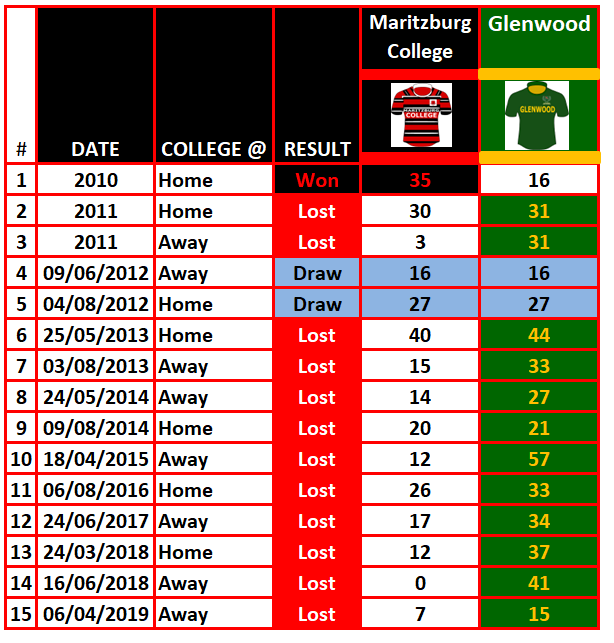