A story that broke in the Eastern Province news last week related to the Meyer Sauerman Tournament and  controversial R200 per player participation fees.

You are forgiven for believing that Meyer Sauerman formed part of the EP youth week trials process. As part of the dialogue surrounding this topic it was revealed that it does not. 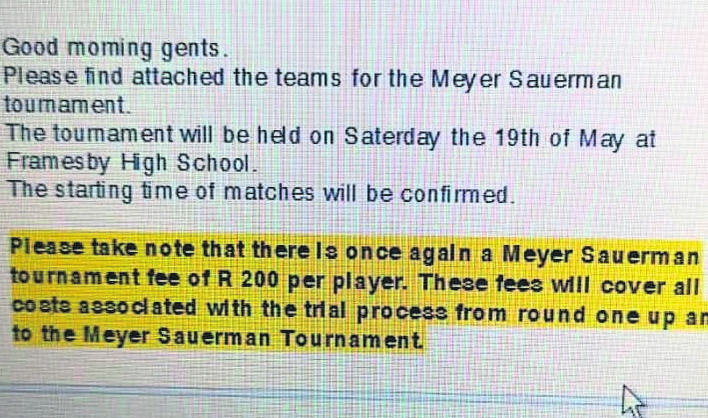 The High School committee chairman Willem October who was also at the centre of an EP Craven Week scandal a few years ago (read here: EP Craven Week official might land in hot water), basically said that no player was asked to pay for trials, that trials were concluded weeks before the Meyer Sauerman tournament and that the R200 was to cover the costs of the Meyer Sauerman tournament held at Framesby High School.

Obviously the wording of the email sent out contradicts this statement.

Interestingly October also stated that it was not true that if players did not participate in the Meyer Sauerman, they would not be considered for the EP Craven Week team.