Officials from KZN will meet today to discuss the high school Youth Weeks. If this was a meeting held in the Western Province it would be a celebratory occasion, fit for many high-fives, pats on backs and chest beating by various goal achieving officials. However it being KZN who are close to the opposite side of the success rate spectrum, the meeting can’t possibly revolve around many compliments particularly when it focuses its attention on Craven Week, unless of course window-dressing becomes the order of the day.

The KZN under-18 Craven Week team called the Sharks as of this year, now has a well-established trend of losing double the number of games that it wins at Craven Week. Putting things in perspective, every year tough games are lined up for the province who have recorded a handful of one-off victories along the way but are generally erratic and seemingly never win on the final match day of Craven Week. Even if quality of opposition excuses are available for the overall loss record,  what needs to be analysed is the gap between the team’s true potential and what they end up delivering during 70-minutes on the field of play. There is definite room for improvement here.

The meeting is a good idea as is the decision to look at the season as whole because KZN is a tough place to prepare a Youth Week team given the congested fixture list with most schools wanting to conclude their rugby programmes before the July school holidays and focus on soccer during the third term. Sadly it’s not the first end of season meeting of this kind suggesting that it has not achieved it’s desired objective in the past. Perhaps the light at the end of the tunnel for KZN won’t be in what’s discussed and agreed to at this particular meeting but will come in the form of an overdue change in the top position of the Association. The incumbent may have served to the best of his ability but as far as improving on Craven Week success is concerned, it hasn’t been an inspiring term in charge. 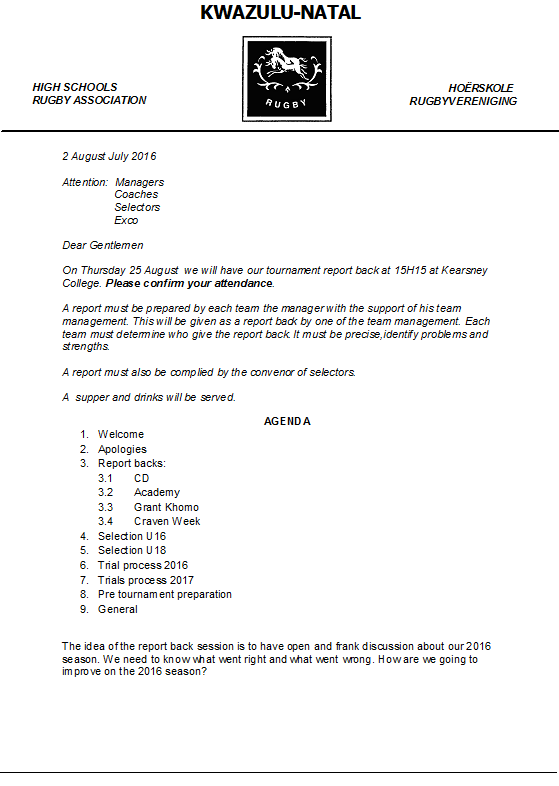