when Jannes Labuschagne received one for a late tackle on rugby legend Jonny Wilkinson during a South African test match against the strongest England rugby team of the modern era. The Springbok lock’s dismissal contributed to a heavy 53-3 defeat in that match.

Fast forward to the current times and the red card has lost its aura. So much so that one wonders if it is not time that World Rugby amends the Laws of the game to eject the player and still allow a replacement on in his place at some stage.

20 years on from the Jannes incident at Twickenham, Paarl Boys’ High proved that even at schoolboy rugby level, you can play for the best part of an hour and still do incredibly well against strong fancied opposition.

In spite of being reduced to 14 players as a result of a questionable red card produced for a clean-out (looking more like a push with the hands rather than shoulder contact) on the opposition scrumhalf, roughly halfway into the first half, Paarl Boys’ High who at that stage led 14-0, still managed to outscore hometeam and favourites Paul Roos, 21-15 during the next three-quarters to close out a 35-15 remarkable win.

An incredible result given the Maroons’ form in recent weeks which included coming from far behind on the scoreboard like they were at stages today. However this is proving to be the Season of Unexpected Outcomes, so nothing in 2022 should surprise anyone who follows South African schoolboy rugby closely anymore.

A point to note, Paul Roos played without the Namibian Nightmare – sensational outside centre Jurenzo Julius – who has been instrumental in getting them back into games during their well-remembered run against other top contenders.

Also Boishaai might have mustered their confidence from having the same Red Card Revolution taught to them at Brugstaat by visiting Oakdale on 09 April 2022. Oakdale lost a key forward early on during that match when they were 14-0 down and then proceeded to play like they were the ones with a one-man advantage, losing the match 22-15 in the end but outscoring HJS by 15-8 after the card. 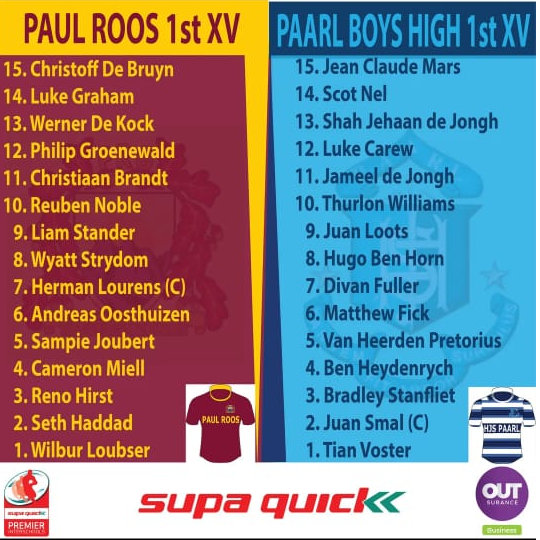