Selectors are blessed for choices in the backline. Here star outside centre Lili Bester (College) has been given an exemption until the end of the month to recover from an ankle injury. In any other recent season before this one, having the quality of either Tholithemba Sibisi (DHS) or Michal de Beer (Hilton) in this no.13 position would have been a privilege, as they both good players. They are testimony to the depth chart this year.

The areas of careful attention are likely to be scrumhalf where there isn’t much to separate the trialists and backup flyhalf. For the former, it might have been worth keeping Westville halfback Lwethu Mdabe in contention. For the latter some of the makeshift options have not worked out in that role. One of the harder parts of being a selector is picking the bench. Some thought has to go into how to make up a fully functional, cover all the permutations squad for the three matches.

Whatever the choices are, there are bound to be some unlucky backs who are good enough to go to Craven Week (and/or Academy Week).

One of the things KZN has not been the best at is information gathering from past experiences. In 2018, Craven Week was in the Western Cape. The KZN Sharks did ever so well to make the final that year. The fields there are wet and heavy underfoot during July. So when conditions got unfriendlier, the light mobile pack got bullied into submission during the main game. So it is worth trying to pick players that are not going to come up short in the physical collisions. We witnessed a bit of that at this year’s Wildeklawer as well.

Really the name penned in first should be that of Thomas Dyer (Hilton), the Billy Vunipola like no.8 who has impressed with his exceptional ball-carrying ability, making him if not the best in his position in SA this year, than amongst certainly one of the leading candidates for SA Schools in that role.

Interestingly young Michaelhouse no.8 Dwayne Mlaba has also been a head-turner with some outstanding performances. It would be good if selectors could reward his form with at least a place on the bench.

Lock Jack Waterhouse (Hilton) is another player who has shown enough pedigree in his role to earn a starting berth. The other lineout jumping options might still be up for grabs.

For loosehead prop there are good prospects and its hard to see any wrong choices here based on the game-time evidence. The same goes for the blindside flank. There are some useful players to choose from. Before his injury, Fortune Mpofu excelled for Michaelhouse and hopefully there is still a window of opportunity for him to be considered for one of the teams. A surprising omission is that of Kearsney warhorse Jason Brien, who is physically tough and consistent.

The other choices will be far harder to make, starting with the national concern position – tighthead prop. Since KZN has been running a high performance initiative where they have had opportunity to work with players and assess them, if selections for this vital role that don’t pan out at Craven Week, it won’t go down well. One of the ignored processes of selection should be to rate and identify any selector who is doing a kak job and get rid of him before the next year. Feel the pressure to get it right because the resources have been provided along the way.

Assuming the players are in-form, the Craven Week success ingredient is cohesion.  It’s possible to beat teams containing better individuals though better understanding and teamwork. However there never appears to be enough time to adequately prepare the team, so it boils down to solid fundamentals mixed with individual ability. Two key areas that selectors should try to cover are lineout success and breakdown pilfering. For lineouts, having hookers who are competent at throw-ins cannot be stressed enough.  The ability to steal opponent balls on the ground is a shared role these days, with even a few backs showing they have the technique and timing to do it well. Make sure this box is ticked though.

Hooker is one of the hotly contested positions. It was surprising to see the Michaelhouse captain Andrew Davis reduced to a trial reserve but hopefully the selectors are dialed in and know what they are looking for in this specialist position.

No one has really grabbed the bull by the horns to be considered a clear-cut favourite at openside flank. If one looks around the country, the love affair with a Heinrich Brussow type isn’t as strong as it once was. Picking a kid who gives you something in terms of workrate on defence as well as can carry a bit without getting dominated, is perhaps the way to go.

Apologies for any names left out 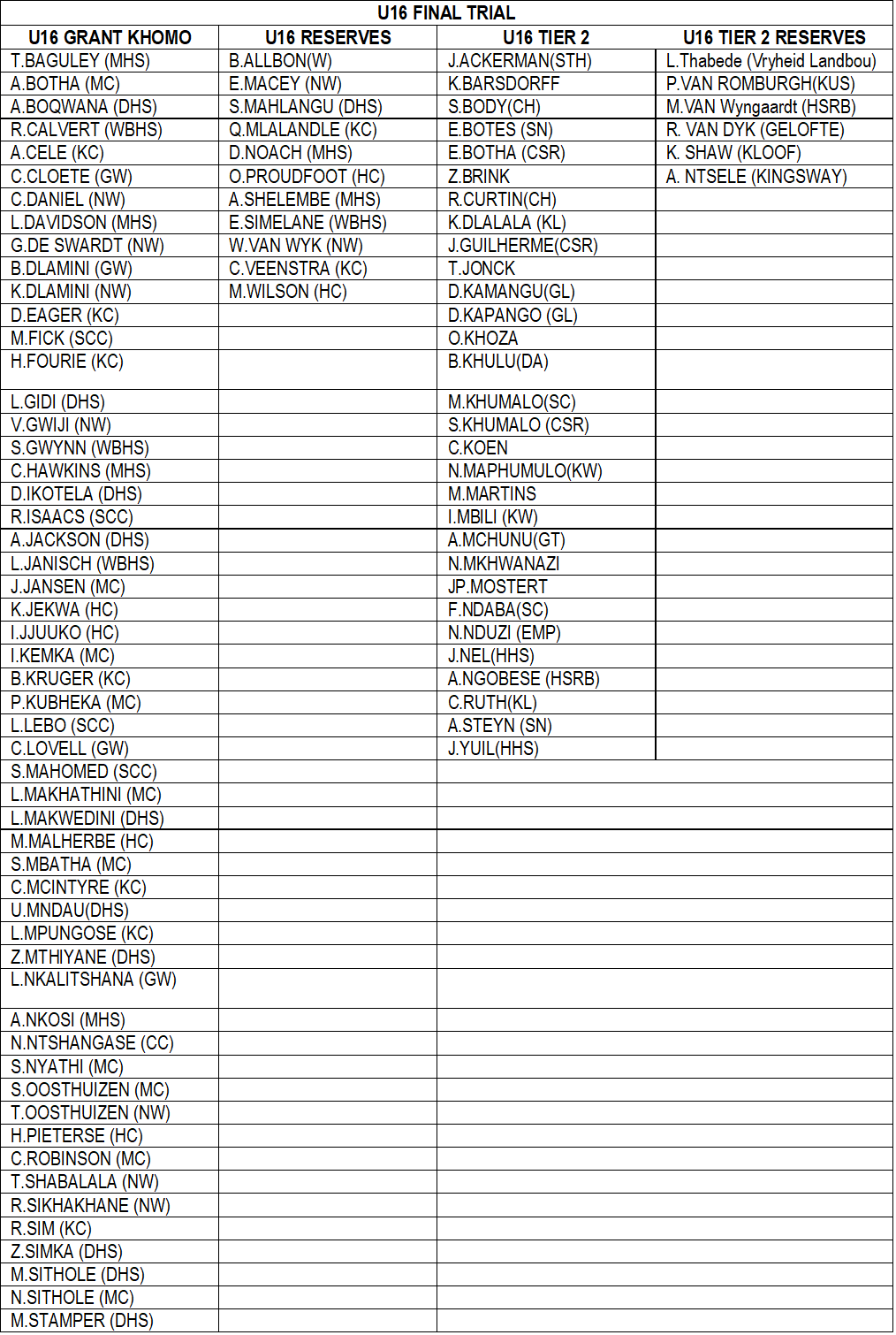